Growing up, Wayne Nicholson was that teenager-the one with stinky feet. Sympathetic to his embarrassing problem, Wayne’s grandmother enlisted the help of a friend to recreate an old family recipe believed to eliminate foot odor. Turns out, the concoction was more than a wives’ tale, and the resulting product was just the trick for zapping foot odor.

Wayne was lucky enough to outgrow his smelly feet in adulthood, but the idea was resurrected when, years later, one of his coworkers at a local wharf was complaining about foot odor. The duo, along with their wives, teamed up to recreate the formula and share it with the masses, and Gran’s Remedy was born.

Using a mix of basic ingredients (Potassium Aluminium Sulphate, Zinc Oxide, Zinc Undecylenate, Talc, Manuka Oil, and Kawakawa Oil), Gran’s Remedy attacks foot odor at the source by creating a dry environment that prevents foot sweat, and in turn, bacteria and fungus. To use, place a half-teaspoon of powder in each shoe daily for one week, and let Gran work her magic! The product is guaranteed to prevent that smell-inducing bacteria for at least six months.

Gran’s Remedy has become a household necessity throughout East Asia and Europe, and is now available in the United States. With the mission of becoming the leading foot odor–control product in the U.S. and beyond, Gran’s distributes more than 1.5 million units of its trusted powder to many happy—and fresh-smelling—customers around the globe.

Check what are our customers are saying on Amazon. 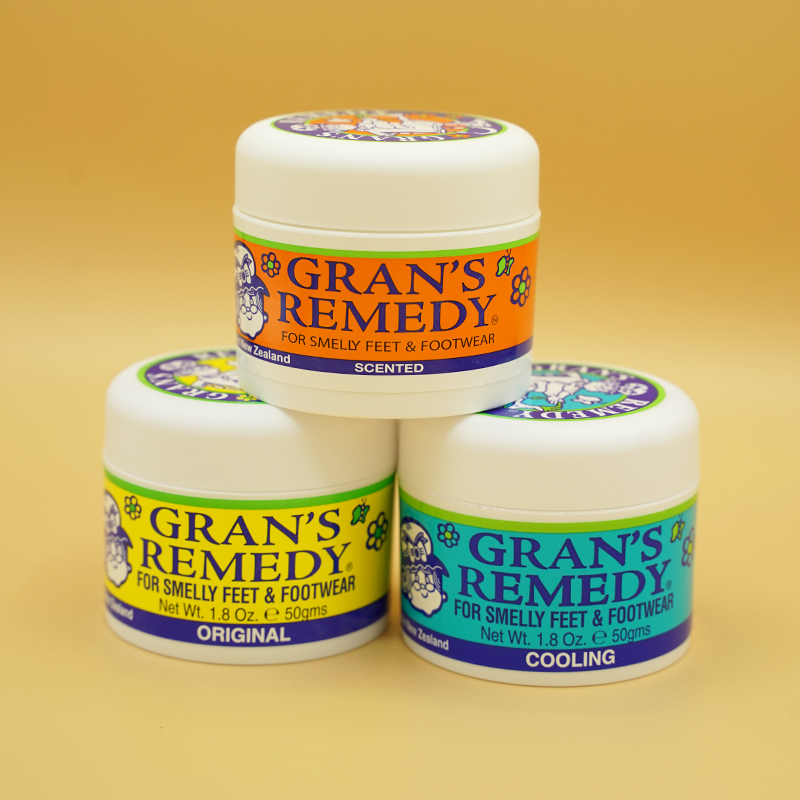 Gran’s Remedy for Smelly Feet and Footwear is a unique blend of powders that treats the problem of smelly feet or foot odor, rather than masking it.

Sprinkle a spoonful (spoon included) of Gran’s Remedy into the footwear you use each day, for seven consecutive days or until the powder is used up. Shall leave your feet, shoes and socks odor-free for up to six months. Footwear that you wear intermittently, such as sports shoes, should be treated each time they are worn until the powder is used up.

We strive to have a positive impact on as many people as possible.